Into the Unknown – Breaking the Silence (Vigilante Records) 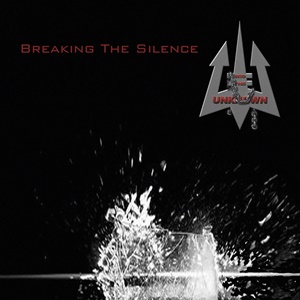 Growing out of a desire for a producer seeking out a pop singer to record a rock song and needing a guitarist to fill out the performance, Into the Unknown now is a going concern – recording a debut full-length plus a cover EP in the interim – setting the stage for this second album Breaking the Silence. The singer Lucie Holzlova performed on the Czech Republic version of X Factor (the singing talent television show), while producer/bassist Rupert Withers has worked with English bands for decades. Now a five-piece with guitarist Ryan Atkins, rhythm guitarist James Milner and drummer Mike Ballard, we take in a thirteen-track effort that contains a variety of symphonic rock / heavy rock arrangements that pulsate well for consumers who appreciate musicians creating hooks as well as pushing preconceived boundaries.

Cowbell hits give chase to a Led Zeppelin-esque circular guitar hook for “Pandora’s Box”, and upon the first verse most will be captivated by the vibrancy and potent pipes of Lucie – she has that Janis Joplin/Grace Slick-like range, along with Adele adding a bit of that seductive charm to the mix. The symphonic side of the band comes out for “I’ve Had Enough”, although the guitars possess this dark/gothic edge similar to the late 80’s when The Cure and The Smiths ruled the alternative marketplace. When the band decide to explore a more theatrical arrangement with the eight-minute “Broken”, you get everything from a ballad style beginning to an 80’s-semi dance/swing feel between the bouncy guitars and percussion, the parts dropping in and out instantly to allow Lucie to soar or soften her melodies when necessary to convey the proper mood and feeling. “You Can’t Have Love Without the Pain” as a ballad moves the listener through a piano/orchestration-led arrangement, the music never overstepping the vocals which will bring tears to many eyes of the listeners. At an hour playing time, Into the Unknown would be wise to tighten the reins a bit to keep the music closer to a ten-eleven track effort, as these ideas start to lose steam by the second half of the record.

Those who love 80’s pop covers will probably enjoy the more guitar-driven interpretation of the Howard Jones classic “What Is Love?” – although the keyboards almost gave the song a bit of a Fleetwood Mac “Tusk” texture to the proceedings. Breaking the Silence is a decent effort for Into the Unknown – and those who love symphonic rock with 80’s alternative nuances will dig most of these songs.