Into the Divine – Harbinger of Entropy (Self-Released) 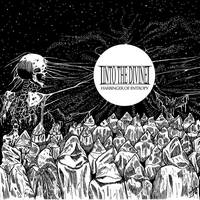 Sometimes one has to wonder where the marketing for some bands begins. Into the Divine is the latest oddity in descriptions, with a sound labeled as modern death metal with influences of Machine Head and Megadeth. It’s also noted that Into the Divine will appeal to Killswitch Engage, Amon Amarth, Dark Tranquillity, and older In Flames fans. While this isn’t totally out of the ballpark, when you hear the sound of Into the Divine, it’s not exactly what one was thinking of due to the description.

Harbinger of Entropy is a far heavier beast than the opening paragraph would give it credit for. Frequent blast beats, technical riffing and melodies, and low growls push this much farther in a death metal direction appropriate for those who enjoy modern death metal laced with technicality more than melody. You can hear this directly in the opening to “A Threnody for the Abnegated.” The band’s sound does bounce around a bit over the album as well, with the opening “Phantasmagoria” being the most direct line to melodic death metal, but featuring some clean vocals that just feel weak and awkward (some better clean vocals appear in “Verities of Immortality”) and “Divine Slave” feeling more like a straight death metal chugger. The tail end of the title track feels more like brutal death metal than anything else and ends the album on a heavy and unexpected punch.

While the description of Into the Divine isn’t a problem, the band’s multiple identities throughout a six-song release is. There’s clearly plenty of talent if the band establish which direction that they would like to go in and stick with it, but Harbinger of Entropy is a bit messy. It’s their first release, so there’s some leeway in this front, but if the band wants to establish themselves, this should be done sooner than later.