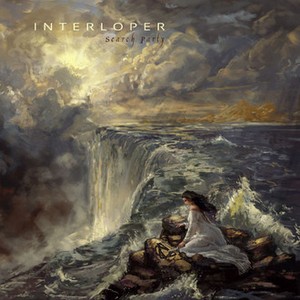 Modern progressive act Interloper seem to have been putting the finishing touches on their debut album, Search Party, for what seems a minute. But it’s finally here, and the name seems appropriate, as the tracks on this album seem to give off a feeling of a band finding their sound. Interloper makes some reaches and experiments, and ultimately causes the album to be a success.

Progressive metal is a bit of a catch-all nowadays, but it does seem to be the easiest way to give an impression of Interloper’s music. The modern vibes sometimes clash with a more extreme one, as well as diving into more straight-forward territory at times. But there’s still an overall flow to it, and it gives the band more to scenery to chew on. The title track has a very Opeth-ian feeling at its start, and later on with the clean guitar moments and the soaring clean vocal moments. Elsewhere, you have a more immediate and thrashing track like “Baring Teeth,” where barked vocals and pulverizing grooves intertwine with intricate melodies and some catchy clean vocal segments. Then there’s the more playful and floaty (at times) “Bound to Fall” that does a good job of tickling the ears with proggy goodness. When it comes to fun, the closing cover of Duran Duran’s “Rio” is bound to hit the spot, elevating the track into more prog-driven territory without undermining the bounciness and upbeat nature of the track.

There’s a lot going on with Interloper’s debut, but there’s a lot of potential too. They can swing some heavy riffs and aggression around but also taper it with some beautiful melodies too. Those seeking some playful yet intense modern prog will definitely get some spins out of this one.