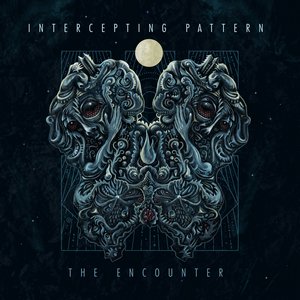 Ever wondered what a metallic alien jazz lounge might sound like? If one were to wager a guess in the here and now, it’s probably pretty akin to what Intercepting Pattern have done with The Encounter. The German act (comprised of members from Defeated Sanity and Cerebric Turmoil) have created an out of this world listen that sits at the more space-y and reflective side of things (for the most part) that metal fans should enjoy.

While there are vocals involved in the act, they are not the ‘lead the way’ type in more structured affairs. Instead, the vocals appear when the placement calls for them, and there’s no set pattern to it. They are pretty chaotic (see “Rebiogenesis”) and ramp up the intensity accordingly. There are a number of spoken word samples but they are woven in well, don’t dominate the mix, and fit the mood to a tee. The jazz/fusion vibe is what the band is going for, and as such, don’t expect any ‘standout’ tracks either. This is clearly meant to be an attention-demanding release and one that should be followed from start to finish. The guitarwork is often in the lead/solo territory, and gives some Fredrik Thordendal vibes when they go for the ‘trippy’ stuff. This furthers the sci-fi feel, which is accompanied by some synthwork and mechanized riffs in the heavier moments.

At only about 30-minutes, The Encounter does a good job of getting to the point, even if it does have an almost improvisational feeling that powers it. The space-y atmosphere never becomes dull, due to the exceptional guitarwork, and they keep the songs tightly packed with content. Intercepting Pattern should offer some strong appeal to progressive metal fans that are seeking some sci-fi riffing that tickles that jazzy itch without overdoing it.