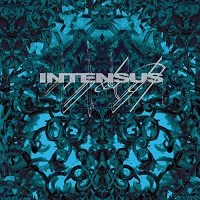 Totally unrehearsed and improvised, Intensus’s self-titled debut is the type of album that would make Pro-Tools lovers and perfectionists cringe. This is actually a cool idea, something bands of this variety (read: spazzy, metal/death-core) should pursue more as opposed to hunkering down and trying to figure out how to keep a song

alive while waiting for the beatdown to happen. And while most of the album sounds like a mess (it does, trust us), it’s the spirit of the project that makes things interesting.

The brainchild of multi-instrumentalist Eli Litwin, the premise was for Litwin to start with a full recording of improvised drum tracks, then to put guitars and bass over them in a 5-25 minute span, thus insuring ultimate freshness. Once these tracks (16 in all) were wrapped up, Litwin corralled a bunch of singers

including Tommy Rodgers (Between the Buried And Me) and Robert Meadows (A Life Once Lost) to name a few.

Tough to get a real gauge on the songs

here, but a distinct Dillinger Escape Plan circa-1999 (read: Calculating Infinity is clearly the main reference point) persists throughout. Litwin’s usage of dissonant chords and frenetic blast beats echo the work of DEP, minus the startling intensity and muscle. The struggle here is to wade through the lengthy instrumental portions like on “Anomaly Detected: Supernova Remnant N63” to get the quick and furious songs like “The Church Forever” and “I Gave Up,” where Meadows steals the show.

don’t. However, Litwin needs to hitch his wagon to another band other than Dillinger Escape Plan or his genius idea will never come to fruition. And as a side-note, we considered writing this review totally improvised, but then the various typos and syntax issues would come to the fore and we can’t have that.