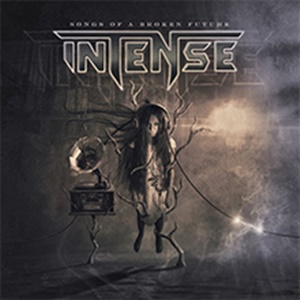 Together since the late 90’s, Intense hail from the UK and combine a mixture of traditional and darker power metal influences with a bit of a modern touch to their style over the years. They’ve released three albums to date – although their latest Songs of a Broken Future comes nine years after their last The Shape of Rage. Good things come to those who await, especially when you are dealing with a veteran act who hasn’t had any member changes since 2004 – and in the case this album, you’ll get twelve tracks and almost one-hour of potent, melodic metal full of heavy passages, diverse hooks, and a sense of energy to make up for lost time.

Intertwining longer cuts around the six-minute plus range for “Final Cry” and the title track allows Intense to gravitate towards different dynamic degrees of their sound – exploring somber and cleaner terrain in spots which then make the subsequent electric parts that much more impactful. The guitars for instance on “Final Cry” open with Nick Palmer and Dave Peak serving up mysterious clean picking and emotive solo activities, in a Nevermore meets Iced Earth atmosphere before kicking up the energy, the thicker power riffs possessing that triplet-like gallop as vocalist Sean Hetherington delivers a poignant verse/chorus tradeoff with supreme background harmonies. When the band stick to shorter, more compact arrangements, they still know how to deliver solid mechanics and memorable hooks on the vocal and music angles – check out “The Social Elite” and “Stand or Fall” for some headbanging tracks that remain focused and sharp. A key to appreciating an hour-long effort is the willingness to float different tempos and textures within a specific style – and Intense are masters at keeping things diverse in that tact, never staying in one specific gear for too long track to track. Bassist Stephen Brine even plays an important set-up role for the closer “Children of Tomorrow”, another stunner with twin-guitar / crushing rhythms and solid drumming giving Sean ample room to go through his multi-octave range as the European power finesse meets American/cultural textures flourish, where you can hear some of the band’s domestic Saxon/Iron Maiden traits come to the forefront.

Songs of a Broken Future will appease those who love 90’s Iced Earth, Nevermore, and the legacy of Intense’s UK metal roots. Do not miss out on this if you love power metal with darkness and musicianship firmly on target.