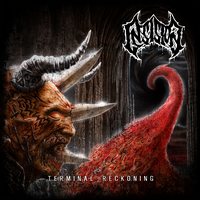 Known by many for close to two decades for their no frills approach to brutal death metal, Insision has also not been without its own evolution as well. Starting out decidedly more “Swedish sounding,” the group has moved into more brutal waters over time. Not a bad move on their part, given the current sea of Swe-clones popping up around every corner.

Indeed, Insision feels at home with the upper echelon of the death metal elite when listening to Terminal Reckoning. Comparisons to European counterparts like Sinister, Decapitated, and Deranged can be heard, as well as some American bands like Cannibal Corpse and Immolation. While the riffs often have the impact of a sledgehammer, the band is not without some subtlety. Wisely sneaking in some technical flavor on occasion (“Infected”), alongside darkened atmosphere (“Old Ways”), and light melodic flourishes (“Ominous Spiral”), there is more method to Insision’s madness than what might be apparent at the surface level. Of course, there’s a good dose of groove injected to the tracks to aid in keeping things energetic and fresh, but these little subtleties worth their weight in gold.

The heaviness factor is firmly in check from beginning to end as well. A crisp, modern production lends plenty of weight to the riffs, and the upfront vocals add to the brutality despite being what you would expect from the genre (even the surprising spoken word segment in “Infected” works well). There’s also plenty of hooks to be found, despite the sheer brutality present, proving that Insision is more than capable of keeping themselves relevant after almost twenty years of blistering death metal done right.