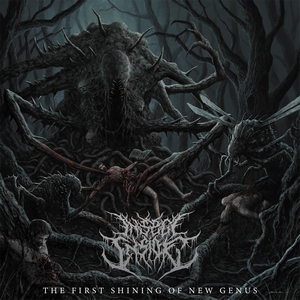 The first rule of brutal death metal is in fact, brutality. No one wants to hear a release in the genre that doesn’t consistently push things as hard as it possibly can. Now that does lead to some problems with albums sounding too similar, but brutality can be found in a multitude of ways, not just by sheer force of speedy riffs. Insect Inside are a new band in this genre that already seem to acknowledge this with their debut full-length.

What sticks out while listening to The First Shining of New Genus is just how much memorability there is in the songs. They can go fast, and they do, but there’s a nice sense of control that is ushered in with the first track (needless ‘intro’ aside) in “Sickening Ground.” With a track under 2-minutes, it seemed likely to be a blitz of riffs and tin can drumming, but there’s actually significant build-up to said frenzy. And the frenzy doesn’t last long, with the band instead shifting more focus to some massive grooves. Those grooves are really what keep the band standing tall for much of the release. The mid-tempo stuff is quite catchy, from the opening of “Posthumous Grief” to driving mid-tempo of “Evisceration Through the Throat,” and the band does well to balance this against the slamming moments that you’d expect. The speedy blasts have their time too, but the balance ensures that they don’t feel like a brutal one-trick pony and rely on the speed up quick and then drop immediately into a slam cliché. The vocals too add to this, moving across the spectrum, from undecipherable gurgles to growls of all varieties.

A surprisingly level of hookiness invades Insect Inside, while they still deliver on all of the body-crippling violence you would expect from such an act. The First Shining of New Genus is a release that you can groove along with in addition to getting your daily dose of utter brutality.