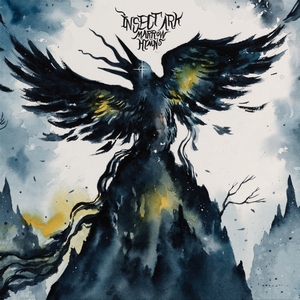 Desolation, loneliness, and isolation are the predominant emotional factors as one begins the journey through Insect Ark’s second release, Marrow Hymns. Journey is a suitable word indeed, as the instrumental duo behind the band give their music a cinematic vibe that feels both psychedelic and gripping all at once, teleporting you to a colder and more barren landscape. One that you won’t easily escape from.

There’s a real eerie sense as you continue through Marrow Hymns, and one that almost feels otherworldly at times. Somewhat due to the unique usage of Dana Schechter’s lap steel guitar, which does tend to gravitate towards the spotlight with its performance. Shifting the music into areas that not usually explored in a thoroughly abrasive metal context, it allows for more emotive underpinnings to rise up to the surface. It’s akin towards walking through a ghost town – a sense of foreboding, yet the natural curiosity to see things through and explore it all. Lumbering tracks like “Slow Ray” nail this atmospheric quality at its highest form. While some of the longer tracks like “Windless” may drone on a bit, it does all seem to be a part of the building of atmosphere in order to sell the entire picture they are painting. Outside of the guitar (which is gracefully enhanced by some synths), the drums are the other star here. Ashley Spungin never has to truly accelerate the music, instead really drawing the listener in to each hit and making them count. There’s a subtlety throughout that more metallic acts could really benefit from at times.

Marrow Hymns isn’t going to be for everybody. It never races towards the finish or annihilates the listener. Instead it shapes and builds up a feeling and sticks with it. A slow burner that you just can help but be drawn towards – even if you can sense the dread and hopelessness rising up to engulf you. 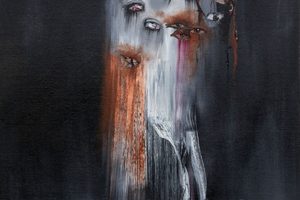