Inquisition – Obscure Verses for the Multiverse (Season of Mist) 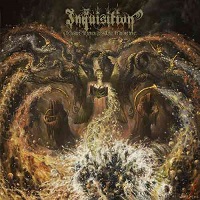 Perhaps thought of by some as America’s answer to Immortal, Inquisition has been steadily gaining prominence on the global stage of black metal since the release of their debut back in 1998.  In those 15 years, Inquisition has released six albums, and has honed their sound into one that is unmistakably their own – this notion really driven home by this, their debut album for Season of Mist, Obscure Verses for the Multiverse.

Standing out is not an easy thing, and while imagery can be a starting point, it’s all for naught if the music isn’t there to back it up.  Thematically, Inquisition trades in Satan, the Cosmos, astrophysics and mysticism.  Musically, they are a two piece band playing dissonantly melodic, slow and mid-tempo black metal with blast beats to spare, and riff after riff of powerful, guitar-driven devil worship.  While comparisons to the aforementioned Immortal don’t sit well with frontman Dagon, they are a bit undeniable.  Vocally, he sings in a croak that is similar to the iconic Abbath, and on OVftM there is more snarl and less “ribbit” to his delivery, which is an improvement over 2010’s Ominous Doctrines of the Perpetual Mystical Macrocosm – though a good album, Dagon’s cartoonish vocals were simply difficult to take.

The other nod to Immortal comes in the simple fact that Dagon, like Abbath, is a great guitar player – a total riff machine that’s not all too common in black metal – who plays with a style that you’d be able to pick out of a crowd.  In fact, this album features one of the year’s best riffs in “Infinite Interstellar Genocide.”   Complimenting Dagon’s playing style is his sense of melody, on heavy display throughout.  I should also mention that Incubus’ organic drumming style adds proper heft to the music.  For being a band firmly rooted in the underground of extreme music, this album is pretty accessible (for a satanic black metal album, anyway).  It’s hooky and heavy, dark and clear like the night sky, and a very strong album all around.  Would it benefit from bass guitar?  Absolutely.  There, I said it. 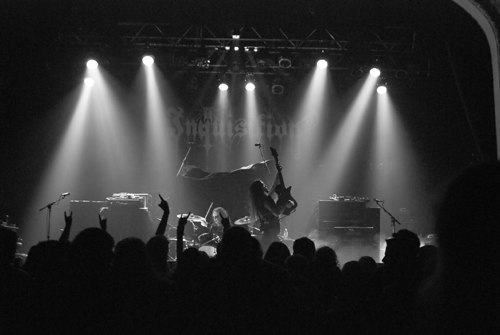