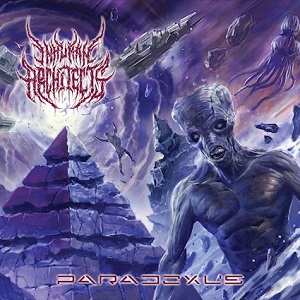 Aliens and extreme metal tend to go together like peanut butter and jelly (or chocolate, if you prefer). The big purple alien and theme, not to mention the name of the Portuguese band, definitely gives you a solid impression that this will play quite a role in this band’s DNA as well. With their debut album coming over 10 years after the band has formed, it’s clear that they didn’t rush things, and Paradoxus is a stronger release for it.

Though marketed as deathcore, Inhuman Architects feels more at home with a label like modern death metal. There’s some indications of ‘core influences, but because they don’t rely on jamming each song full of breakdowns, instead utilizing a myriad of different elements to flesh their sound out, it’s tough to pin that particular label on them. You can get some trippy and intriguing solos (“Defying the Gods”), grooves and sci-fi atmosphere (“Nibiru’s Revenge”), and dark and cinematic melodies (the appropriately titled “Night Intruders”) to mix well with that driving death metal aggression and energy. The divide and conquer approach with the way melodies lace the extremity in and of itself gives the band some great leverage for a debut release, and when they do decide to go big on the breakdown aspect, it feels earned rather than just being a piece of scenery.

Paradoxus is a solid debut to check out for anyone seeking some modern death metal. Inhuman Architects clearly took note of their writing and spent the time to make it have an impact, and due to that, there’s a lot of potential for this act to harness as they continue onwards. But for now, Paradoxus provides just the right mix of immediate aggression and sci-fi soundscapes to leave an impact.