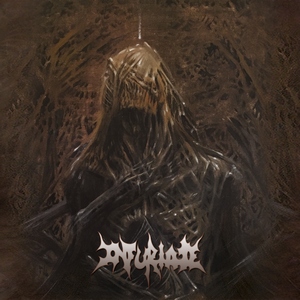 Certainly one of those cases where the cover art is strong enough to warrant a closer examination, the Alien-esque piece here is rather captivating. The grim tone carries itself completely over into the music, with dark riffs being a hallmark of Infuriate as the music progresses. Quite fitting for the band’s debut, which embraces much of the late ‘90s brutal death metal scene’s ethos and vibes.

Those who spent plenty of hours spinning the best of the Suffocation and Deeds of Flesh discographies will be easily drawn towards Infuriate’s sound. They have done their best to attain the same level of intricacy when it comes to the technical riffing and overall thunder of their approach (the members have been involved in other extreme acts throughout the years prior). Even down to the production, which has an organic feel that is reminiscent of the afore-mentioned time era without bowing down to it completely. The music is rather explosive for the most part, with short tracks of that mostly fall within the 2-3 minute zone – a sweet spot that manages to keep the music flowing forward with assaulting energy without becoming tedious over the long haul while still feeling complete. It’s not just a full-out blitzkrieg either, with the band knowing how to add some menacing grooves into the formula without mellowing the abrasion (see “Engastration”).

The bottom line is this: Infuriate give the brutal death metal fan exactly what they want. Don’t expect anything more or anything less. It’s brutal, intense, and pretty much guaranteed to steamroller you over. Its 30-minutes of visceral carnage that makes it easy to hit the repeat button with glee.