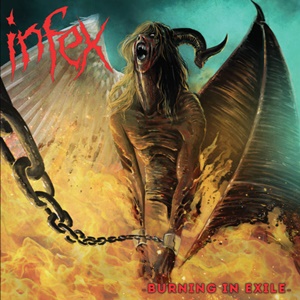 Growing up in California with a steady diet of early thrash, Infex arose in 2010 intent on putting their own stamp on things. Solidifying their first lineup in 2012 prior to releasing the debut Circle the Drain album, they’ve consistently dealt with lineup changes over the years while issuing a second full-length Killing for Jesus in 2016. They’ve had the chance to play shows with locals and legends like D.R.I. and Exodus – tinkering with the membership again as the quartet now release Burning in Exile – a record that took longer than anticipated to record and release due to COVID-lockdown restrictions.

Listeners can expect a steady churn of tasty, aggressive riffs, bulldozer rhythms and pounding tempos, plus plenty of gang-like vocal support against the fierce crossover-like main vocals with occasional extreme/death-like nuances depending on the atmosphere of the track on hand. Going to seasoned metal producer Juan Urteaga at Trident Studio ensures a sound that stands up well against the veterans. Aspects of Testament, Machine Head, and Destruction come to mind, along with a bit of that D.R.I., Excel, Cryptic Slaughter crossover/hardcore angle when it comes to specific transitions, attitude, and straightforward obliteration that occur in headbanging cuts like “The Abyss” and “Blood of the Wicked”. Guitarist Jack Child handles the main vocals, his delivery militant as he barks his lyrics like a general preparing for war. Occasional semi-blasts or tremolo stop/start picking allows Infex to dig deeper into some death/extreme nuances as “Acid Reign” brutalizes through incessant double bass work, growled verses, and sinister guitar/bass syncopation. Beyond the normal social/political commentary for most of the lyrical content, there’s also time for alcohol-fueled fun within “Beer Run ” where the chaos, energy, and community spirit take command for three minutes.

Nine solid thrash songs in a tidy, compact thirty-seven minutes, Burning in Exile sticks to tried and true principles and gets the job done for those who want to expend energy in the best direction for maximum body and brain impact.