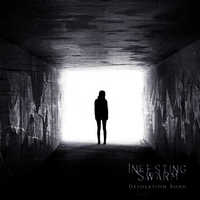 Dortmund, Germany’s Infesting Swarm play a style of melodic blackened death metal, or maybe deathened melodic black metal is more correct. What’s clear is that it’s all of these things. And further, there is a bit of the old post-something in the water as well – providing some enveloping atmosphere and occasional pensive moments. But what I instantly thought of was maybe American band Daylight Dies meeting some other modern (read: not raw) melodic black metal band, in order to approximate the sound that Infesting Swarm is putting out. So yeah, melodic blackened post-death/doom it is then. Whatever.

With a traditional five-man lineup, Infesting Swarm display a lot of strength by way of drummer Jonathan on this, their debut album. Impressive use of fills and doubles (and all the trimmings) on this record, blasting and beating with precision. The dual guitars create a good amount of space with their near-constant stream of good melodic lines and crystalline tones. Tremolo picking set against fatter chords as well as plenty of harmonizing tremolo action on display. Clean lines come aplenty, lots of them in sections of rest, showcasing the very clean production on the album. Vocalist Tim certainly is the largest link to the death metal facet of the band, roaring in a decidedly more DM fashion than your typical BM affair (this along with the riffs contributed to my Daylight Dies reference above).

Starting about halfway through track four’s “Year of No Light”, with an engrossing riff, the album kicks into its definite stronger side. While a stylistic shift or anything representing a dramatic change from the first half isn’t whats happened, the back end of the album just feels stronger. Track six’s “Der Lauf der Zeit” is a highlight of Desolation Road. It’s too bad that the album is not as strong to start, which represents the main problem with the album: it’s not bad. I mean that colloquially – It’s not bad…but it’s not great. Hard to pinpoint the why in that sentiment, but it’s primarily due to the length of the songs in relation to the strength of songwriting. Sometimes it can get dull.

Clocking in at nearly an hour, Desolation Road is a polished debut from a band with much promise and, despite the shortcomings herein, seem more than capable to follow this up with something great.