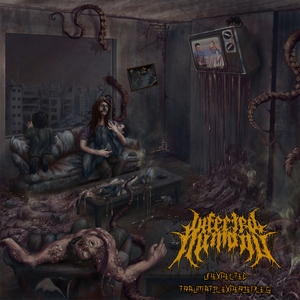 Yep, this is another case of knowing exactly what you are going to get under the hood just by looking at the grotesque cover art. Infected Humans is an Ecuadorian brutal death metal band that sounds just like their ‘90s inspirations (even down to the tin can sounding drums). There’s not many unexpected twists and turns from the musical perspective.

Hopefully you enjoy those tin can drums, because you are going to hear a lot of them on Unexpected Traumatic Experiences. While it does make it feel like a bit of a throwback, it’s to the point of distraction when the band so frequently goes into rattling them off at near light-speed tempos. When they do so, the whole thing predictably turns into a blastbeat-riddled mess of zig zagging riffs and chaos (and not in a good way). When combined with the vocals, which occasionally sound like drunken slurred growls just being flung into the mic, it makes the sound feel even sloppier and haphazard. For what it’s worth, when the drumming does lay off the blastbeats, they do make a conscious effort to put some notable guitarwork in there (“Calcining Human Flesh”) but it comes in as ‘too little too late.’ Couple these issues with a thin guitar sound that keeps it from that bludgeoning sound that this genre requires, and you can start to see how this small issues add up into a bit of a damning combination.

Infected Humans plays to the usual slamming, brutal death metal standards and falters as a result of it. A slew of smaller gripes combine to make a record that just doesn’t satisfy in terms of brutality due to a rather unhinged execution.