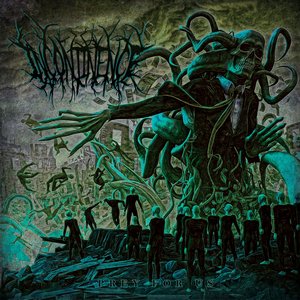 It takes some balls to open up a death metal album with a 7.5 minute song. But that’s exactly what Incontinence does on their second full-length album (and first for Ultimate Massacre). The upstate NY-based band carries some pedigree and experience, with members comprised of former area acts Armor Column and Held Under, as well as a current member of Skinless. Both of these facts tie together when you hear the whole of Prey for Us, which doesn’t come off as straight-forward as you may expect.

Incontinence is neither a modern band obsessed with non-stop technical barrages nor an old school act that is nearly rehashing the ‘90s death metal scene. Instead, the band focuses on heavy riffs with intrinsic melodies and lots of groove and atmosphere. It’s a dark album, which becomes immediately apparent with the first track and the thick, oozing guitar tone contributing to this vibe. There are some changes in tempo as you progress through the album, but it’s clear the band feels most comfortable in the mid-tempo, where they can include a number of melodies into the riffing without compromising their more brutal elements and capitalize on massive grooves. With the blend of these elements, there’s an almost hypnotic sense to the music – not that it doesn’t stand out (particularly in the solos), but in the notion that you slide right into the grooves.

While some may argue that Incontinence plays within the confined death metal playbook, it’s their focus on atmosphere, melody, and groove that cause Prey for Us to shine. Those who want their death metal to keep a certain sense of belligerence while maintaining a level of mature songwriting sensibility would do well to check this one out.