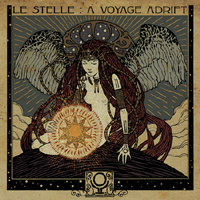 A common pitfall with individuals or groups within an artistic medium in looking to do something ‘different’ is that they wind up shoehorning into their creations so many disparate and often incompatible ideas that the end result is a patchwork mess and ultimately falls apart under its own weight. Unfortunately that is certainly the case for for Incoming Cerebral Overdrive on Le Stelle. Overflowing with mathcore underpinnings and a few dozen different aspirations, the resultant sound is something akin to a fourth string Blood Brothers or Circus Circus, rarely sucking the listener in or amounting to much other than obnoxious noise.

Opener “Mirzam” sets the tone of the album and draws the template that much of the remaining songs will follow. Jagged mathcore rhythms and a distinct lack of song-writing focus mar any enjoyment that otherwise might have been derived from the track. While it’s not uncommon for groups to stumble in putting their best foot forward on an album and then make up for it in that which follows, that isn’t the case here as “Sirius” and “Betelgeuse” each embody the same traits and it persists throughout the remaining songs.

B-movie vibe, but any joy derived from them is often squelched when the vocalist opens up. While it cannot be said he doesn’t cover a diverse range of harsh styles, not are particularly appealing and fewer still actively mesh with the music in which they float above. The vocals go a long way in preventing the listener with making any sort of connection with the music.

Despite the fact there’s an extensive concept here and the album features a rather stellar (pun intended) cover and artwork, it’s a shame the music within does little to live up to either. At 47 minutes the album has the feel of three times that length, this problem exacerbated by the fact that almost every song is lacking a particularly solid base from which the listener can hold on to. A spiraling collection of noodly bits and screaming, it could almost be offered up that perhaps this album is what happens when artistic self-indulgence goes all the wrong ways. Future releases from the band may see them fine tune their approach somewhat and streamline the experience (or at least push in some ideas that work), but for now all that’s here is a noisy mess of unrewarding and inaccessible pieces.