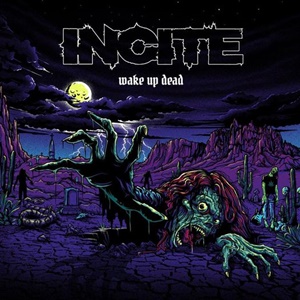 Pedigree plays a part in often establishing credibility – especially in an underground, niche genre as metal can be. Featuring Richie Cavalera on vocals, we all know the work of his stepfather Max between Sepultura, Soulfly, Kill or Be Killed, and so forth – so Incite makes their way into the hearts of groove/thrash metal fans through their modern take on the movement. Wake Up Dead is the sixth album from the quartet, another shining effort into the band’s penchant for straightforward vicious riffs, penetrating and primal tempos, plus take no prisoners, rip your head off vocals.

The heavier, staccato-driven guitar tone and equally punishing double kick/snare combinations elevate “Deadbeat” and “Stagnant” to measures that launch bodies into circular pits, walls of death, or crowd surfing activities – the type that followers into Lamb of God, Machine Head, Slayer, and Pantera are well-versed taking in. Beyond his obvious rhythm skills, guitarist Eli Santana (Holy Grail, ex-Huntress) lays down the right mix of spicy leads and shredding to enhance his main duties – check out his fluid mechanics for “Mental Destruction” as well as the upper neck tremolo motions during the concluding moments of “The Aftermath”. Choosing to tackle subject matter relating to divorce, despair, and isolation probably matches a lot of the feelings many Incite fans face coming out of this prolonged pandemic – and Richie’s delivery mirrors what you get through the music, his phrasing, grit, and attitude a combination of Phil Anselmo, Randy Blythe, and a bit of Robb Flynn when necessary. Max even makes a duet appearance for “War Soup” – the steady marching strains soon shifting into a potent thrash juggernaut, providing plenty of bouncy moments while the duo shares in the ‘This Is War’ main line of emphasis.

Consistent road warriors that they are, Incite brings another platter to the table that should have no trouble adding more staples to the setlist – ensuring sweat infested hordes a glorious time.