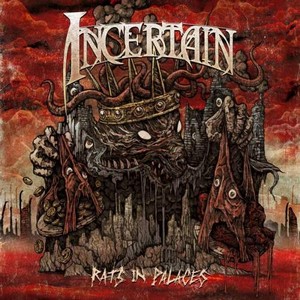 The next band stepping through the gates of the death/thrash world is that of Germany’s Incertain. A fresh act with only an EP to their name before this, Rats in Palaces sounds much more polished than you might expect. While they tend to wear a number of their influences on their sleeves, there is some very clear potential for their future based on this recording.

Taking the classic thrash approach of bands like Slayer and Testament and giving it a more abrasive and deathly gut-punch in the vein of acts like The Haunted and HateSphere, you can expect an album that totally delivers on the ‘heaviness’ spectrum. Like the bands mentioned, you also can hear quite a bit of catchy riffs sewn into the mixture. Heavy, mid-tempo crushers are the specialty of this band. There’s not a track that comes up short in this regard. For instance, “Rage & Greed” capitalizes on a few choice riffs that are sure to get the neck working and lays down some strong leadwork on top to seal the deal. Other cuts like “Immortality” further highlight the melodies, but still keep the emphasis on angry riffs. Vocalist Liane Walter has some caustic barks that fit the music well, only deviating from them on “Mask,” where she employs some stoner/doom-like croons.

As their first full-length, Incertain have songwriting and thrash riffing down to a science. It might be played in a classic style to the point where much of it feels familiar, but there’s plenty of energy to go around and lots of reasons to return once the end has been reached. Let’s see where they head with the next one, when they have more of their own spin on things.