In the Presence of Wolves – Of Two Minds, Stage 1-2: The Ape and the Cage (Self-Released) 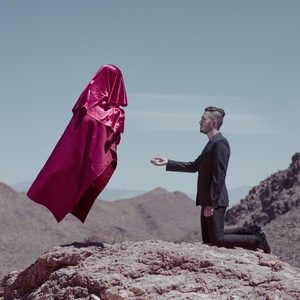 Lots and lots of progressive metal in the waters nowadays. The description sometimes leads to confusion, but relative newcomers In the Presence of Wolves easily fall under its ever-growing blanket. Following their 2015 full-length, Thalassas, Of Two Minds is their newest EP and is sure to scramble some brain cells with its intricacies.

Modern prog-metal and progressive rock meet with some theatrical elements working their way in as well. It’s a start at least, but it doesn’t totally capture what the band is doing as a whole. The EP is a conceptual release based on twin brothers, one having schizophrenia and one without, and the sane brother going through the first two stages of grief following the other’s suicide. A complex and engaging topic, and it’s handled well by the lyrical and musical outlets. After a more gentle opening (“As We Speak Pt. 1”), the full-on prog-explosion begins with “The One Who Fell to Earth” and doesn’t really let up. This is not a band that sits still, and prog fans will no doubt be overjoyed by In the Presence of Wolves’ intricate riffing patterns, which encompass everything from Between the Buried and Me to Coheed and Cambria. There’s almost always something to catch your ear and be impressed by – be it a proggy riff, staggering solo work, or even a soaring vocal hook.

The most important thing though, is that the album has heart. All too often, these technical forays into prog leave the listener with something that’s a mechanical display. On the contrary, Of Two Minds has an emotive pull, balancing more melodic moments that grab you in a different sense than the heavier ones. The melodic side still maintains the cerebral stimulation you’d expect, but allows the songs to push longer in time without exhausting the listener (see the 10-minute title track).

Of Two Minds successfully tells a gripping tale while providing enough progressive/technical insanity to impress both sides of the progressive divide. In other words, intellectually stimulating while still emotionally engaging. A combination that yields impressive results.