In the Name of God – We Are the War (Self-Released) 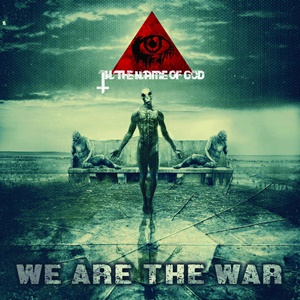 Polish band In the Name of God has been slugging it out in the independent trenches since 2009, releasing two previous full-lengths in 2010 with People Killed Jesus and 2014’s Imaginary Paradise. Their latest album We are the War features a new vocalist in Artur Janicki, and delivers a potent mixture of thrash riffs and death-oriented action across these eight tracks. It’s easy to assimilate that the quintet’s skill sets and fierce outlook coupled with smart, catchy groove-like moments could gain a wider birth of followers that prefer the cross-pollination template.

Jackhammer, semi-staccato stunted riffs punctuate the fast-paced orientation for “Revenge”, the transitions offering melodic death musical components before the next ripping thrash barrage carries the sonic landscape. When Pawel Hein and Damian Raczek execute their guitar parts in mid-tempo ways, the comparisons to mid-period Sepultura and Slayer come forward, “Little Boy” serving as best evidence while the shredding abilities from Damian leap out during the instrumental break. Varied double kick work that moves from almost doom crawl to blasting propensity from Bartek Serafinowski is an asset to treasure for In the Name of God – keeping the material alive and fresh, especially when reaching death/black intensity during the brutal sections of “Terror Games”. As a vocalist, Artur has a dual nature to his delivery – one part lower in more of a throaty, speedy vernacular, while the other side like a flick of the switch can be a blackened screech ready to wake the dead. The second half of the album contains a couple of longer 7 to 8-minute cuts, where the members explore more atmosphere and extended instrumental elements – of which “Better Believe When Hell Comes to Us” works best, creating hypnotic/tribal-like themes that made this scribe think of classic Slayer, Vader, and even early Forbidden.

We Are the War proves In the Name of God aren’t late to the thrash/death party, and offer enough versatility and progressive ability to shine beyond their peers.