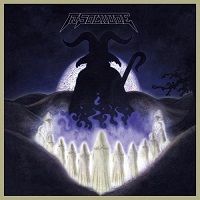 Surely the math has to be wrong in the presser for the re-release of In Solitude’s debut album. It claims that lead singer Pelle “Hornper” was 16 years old when the band recorded said debut, having joined the band a year after their 2003 formation. That would make the singer 11 years of age upon joining! Methinks that the age disparity and novelty factor surely would have caught someone’s eye well before 2008. Oh well. Math is hard for us metal folk.

While the band cobbles together material for the follow-up to 2011’s ballyhooed The Word. The Flesh. The Devil, Season of Mist wisely snapped up rights for the band’s eponymous debut. Like its successor, In Solitude has a noticeable Mercyful Fate tempo and feel. It’s a quality combination of non-falsetto King Diamond, and less hysterical arrangements, although one could argue MF’s penchant for elaborate song structures is what made them so original in the first place. Nevertheless, the straight-metal boogie of “In the Darkness” and “Beyond Is Where I Learn” demonstrate a band not quite willing to get too far in front of itself. There’s loads of cohesion here, just heed the call of “7th Ghost.”

A smart, savvy reissue on all fronts, In Solitude have proved in a succession of albums they’re capable of hanging around the traditional metal party and not annoying anyone. This debut is probably better than we give it credit for, but that’s what happens when you look at things through a Mercyful Fate-tinted lens.