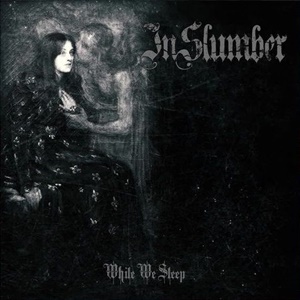 Here’s a name I haven’t heard in a while – In Slumber. With their last release being 2009’s Arcane Divine Subspecies, it’s been 13 years. Time flies, doesn’t it? It’s now 2022, and the Austrians are back with While We Sleep.

In the melodic death metal scene, it’s easy to get lost in the shuffle. In Slumber have always come in under the radar, but have delivered some quality releases, with their own brand of the style that weighs towards the heavier end of things, with tinges of black metal here and there for good measure. Has the considerable time gap between albums changed anything? In style, not particularly, but everything seems to be more in focus than ever.

“Clairvoyance” begins with an infectious, speedy melodic package, which quickly transitions into something much heavier – transitioning between the two throughout, with the sharp rasp of vocalist/guitarist/bassist Wolfgang Rothbauer bringing it all together. A great way to set the stage with a balance of melody and brutality, which is a common theme. “Stillborn” slows the pace a little, with some hints of black metal seeping through to give just enough of a different look to keep things interesting. “Parasomnia” is next, which the band also made an aesthetically fitting lyric video for. This is more of a slower paced track in comparison to others on offer, containing some of the most memorable leads on While We Sleep. The clean passage is well placed, too, adding a fitting change of pace. Other standouts include “The Lake of Visions”, which contains an emotive and memorable solo and some punishing riffs, while “The Demon Whispers” is one of the most in your face tracks that also takes a turn to the melodic side with a haunting acoustic passage. The songwriting keeps the album interesting and varied enough to avoid repetitive tropes that plague so many others.

The production is clean with just enough grime, courtesy of Lukas Haidinger of DDP Studio Braunau. The mix keeps every instrument in balance, with no one element overshadowing another. It’s crisp, devastating, and concise. Drummer Flo Musil also adds an excellent rhythm section, dictating the pace throughout with skill and vigor.

Melodic death metal fans (especially if you like your melody with some kick), take note – In Slumber is back with a banger. As mentioned previously, they’ve managed to slip under the radar in the past, but one would expect them to climb the proverbial ladder and get some of the recognition they deserve with this release. While We Sleep truly shines as all elements come together into a memorable slab of harmonious and melodic destructiveness. Say that three times fast, while blasting this on max.