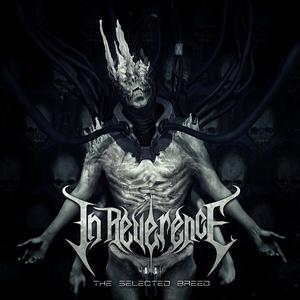 The simple notion of Swedish death metal alone is enough to cause some to grin/grimace, depending on your mood. But the artwork alone should be enough to sway the grimacing to give new upstarts In Reverence a chance. And based upon the sonic destruction that The Selected Breed causes from your first listen, you’ll be glad you gave them the opportunity.

In Reverence pulls together more influences than you may imagine. Yeah, it’s death metal…no shock to the system there. But they blend together a wide swath of sources for said material – everything from the classics to the more bombastic and menacing (Behemoth comes to mind) to the atmospheric, and even modern flavors have their moments. “Anthropogeny” is an excellent example of what the band can offer. It starts off brutal enough, with a hint of groove while it steamrolls along, grabbing some light atmosphere to add flavor before the blastbeats kick in. A more grand and melodic feel sneaks in at times, between the thrashy riffs and offers some contrast to the pummeling. Pick any of the remaining tracks (besides outro “Life Rejuvenate”) and you’ll be treated to a similar shifting in balance. It keeps you on your toes, and the added grandeur, atmosphere, and melody help to distinguish the band from a growing mass of ‘regular’ death metal legions. Lastly, the sound itself achieves an excellent balance as well – it’s sleek and modern to enhance the added elements, but it never suffers from the sterility that often accompanies such a feeling. The riffs feel massive and occasionally earthshaking, with upfront vocals that are powerful but aren’t too “in the way” – in other words…just right.

The Selective Breed is an impressive debut from In Reverence that should have some level of appeal from a large number of extreme metal fans. Melody, majesty, and malevolence all in one shared dose.