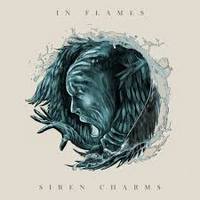 There was a point in In Flames career where each new album release was an “event.” The metal community was excited to hear what the band was up to. Sadly, the past few In Flames albums have not been held in such high regard. With In Flames officially hitting the “big leagues” with this release on Sony, most of us dyed-in-the-wool metal fans saw this one coming. It’s hard to disappoint when there are so few expectations left, but In Flames does their best to do so with Siren Charms.

Everyone knows that In Flames is never going back to that twin-guitar harmony, melodic death metal feast that quickly made them fan favorites with The Jester Race, Whoracle, or even Reroute to Remain. It would be an easier pill to swallow though if they didn’t feel like they were floundering across the board; unsure of which direction they wanted to go in. Siren Charms is a disheveled smorgasbord of tepid attempts to appeal to the Hot Topic youngsters. It’s okay to be diverse and explore different musical directions, but it needs to be cohesive. Songs like “Everything is Gone” revel in nu-metal downtuned riffing, “When the World Expodes” veers more electronically and features some guest female vocals that border on the operatic, “Through Oblivion” seems like a band pushing to reach rock radio, and “Paralyzed” feels like In Flames is trying to ape the metalcore bands that tried to originally ape their sound. Going along with this is the fact that most of the riff and guitar leads/solos (when present) feel uninspired and bland. These are not the types of riffs expected from an In Flames release.

The final nail in the coffin though, is In Flames reliance upon Anders’ clean vocals. Despite the fact they’ve never been his strongest suit, with each release their occurrence multiplies. The verses in “Through Oblivion” are nothing short of cringe-worthy. In all fairness, sometimes they work. The last two songs on the album, “Monsters in the Ballroom” and “Filtered Truth” show a slight uptick in quality and offer a least a little hope for the future.

With the previous few In Flames releases, it’s clear they’ve chosen their path. Don’t think we’ll ever get that “back to the roots” album that seem to be all of the rage these days for reformed bands, as they will probably drift more and more towards the mainstream. Will they be successful? Perhaps, but its safe to say that In Flames can be crossed off the “must hear” list for future albums. How the mighty have fallen.