In Flames – A Sense of Purpose (Koch Entertainment) 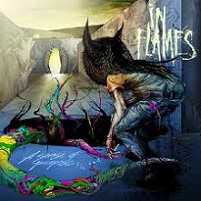 Few can polarize like In Flames; the band’s once flawless underground pedigree has been smeared via a handful of less-challenging and ‘true’ albums, the result of the band growing tired with the simple melodic death metal formula. Fact of the matter is, there are plenty of bands

who have picked up that ball and ran with it (most notably Nightrage and The Duskfall), so the notion of In Flames ever making a return to the days of The Jester Race and Whoracle is quite counterproductive.

Wisely shedding the production skills of Daniel Bergstrand, who could not have made In Flames sound more muddy and groggy the last three albums, the band has created a solid, sonically clean

compliment to the very-aggro and enjoyable Come Clarity. Where Come Clarity was brute force and speed, A Sense of Purpose is In Flames being more concerted and deliberate, with no less than six tunes here ranking as winners.

Lead track and single “A Mirror’s Truth” is an excellent start, with Stromblad and Gellote sinking these rusty melodic hooks in early, especially during the hard rocking chorus. “Disconnected,” in spite of its very juvenile chorus (“I feel like shit, but at least I still feel something” – c’mon Anders…) is stocked with creamy melodies, as is “Sleepless Again,” which is Friden’s best performance

on the album, with his much-maligned clean vocals getting the layered treatment to great effect.

”Alias” is only effective in the bridge

, as a rather kid-like chorus (recognize a trend?) brings this one down. “I’m the Highway” benefits from a patented twin-g attack from the onset and ranks as one of the album’s better cuts, while both “Delight and Angers” (love the little clean guitar break) and “Condemned” are beefy groove-metallers that are quick to cut the chase via immediate hooks in the guitar melody department.

Some derision has been made over the 8-minute “The Chosen Pessimist,” a designed break in the flow of the album. Said track takes a while to develop and never reaches its full potential, although it might achieve its purpose of breaking up the relative monotony of an 12 song

album with each song coming in at less than four minutes.

While the band still refuses to flesh out their songs

and in spite of Anders Friden’s questionable tactics both vocally and lyrically (perhaps another go ‘round with DT’s Nicklas Sundin is in order?), In Flames can still put together an immediate, gripping album that is easy to come back to and enjoy.

Some, including yours truly still await the moment when the band returns to more adventurous and multi-faceted song arrangements, a veritable touchstone of their mid-years, but it appears In Flames will forever march to the beat of its own drummer and stick with relatively easy and quick songs that get in and get out. Either way, A Sense of Purpose is top-notch, not much of a surprise in these parts considering the high degree in which In Flames’ abilities are held.