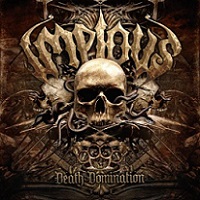 Who needs to physically exert themselves when you get wind of this aggressive cardio speed/death album from Sweden’s Impious? Their sixth studio platter, Death Domination doesn’t begin with an unassuming build up or any atmospheric intro, instead, “Abomination Glorified” begins the tight horse race between Valle Adzic and Robin Sorqvist Ginsu picking/ chord techniques and Mikael Noren’s ubiquitous double bass/ snare blasts and rarely lets go for more than a four or eight bar transitional movement.

In the epic 5:30 “And the Empire Shall Fall” the quintet gain more of a chance to showcase their mid-tempo and slower leanings, giving the beginning and ending more of a tribal, Grip Inc. approach especially during the early Dave Lombardo years of this act. Vocalist Martin Akesson keeps up with the energetic assault capably, yet I believe his screams and melodies all begin to jumble together into the same verbal stew half way through the record.

You’ll never mistake titles like “Hate Killing Project” or “As Death Lives in Me” for a group looking at wide spread commercial acceptance. Impious are all about the speed, thrash and death, so be aware that dynamically you will get little variance in the short, tight arrangements. I can imagine some intense stage diving and hair whipping during the half-time tempo changes for “Rostov Ripper” though- which gives Impious’ guitar duo a chance to add some slower, effective instrumental moments.