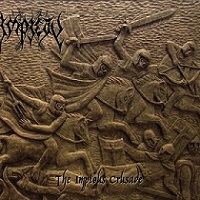 Singapore’s strongest entrant into the extreme metal underground, Impiety’s 23 years in the game is not only an accomplishment, it’s an assertion how well the band’s early works still resonate, most notably their 1996 Asateerul Awaleen full-length debut. They’re one of those bands who heads off to do more splits, EPs, and odd releases than regular LPs, so this is where the five-song The Impious Crusade EP comes in.

Privy to the black/death sound that teeters more toward the unrelenting sonic speed of Angelcorpse and Morbid Angel (at their fastest) than the more accessible angle of Behemoth or The Crown, the five missives on The Impious Crusade are furious blast-guitar exercises. “Commanding Death & Destroy” is on the pre-1990 warpath, while simmering “Accelerate the Annihilation” and brazen title track might be without dynamics or pacing, but they’re vicious stabs and slabs of exotic extreme metal. No prisoners taken, of course.

A fun cover of the WAY cult act Sorcery’s “Lucifer’s Legions” rounds out the bunch, perhaps offering a little peek into where the band gets its beer-drinking kicks. Never mind that – The Impious Crusade is Impiety at their most feral and scathing. Here’s to 23 years and counting…