Much like its predecessor, Unholy Congregation of Hypocritical Ambivalence is a mouthful.  But Impetuous Ritual’s latest quest into the depths of the underworld has been quite fruitful.  While the number of bands attempting this harsh, peculiar cryptic death metal field are increasing, there are still really only a handful of bands that do it right.  Count Impetuous Ritual in as one of the very best.

Impetuous Ritual does not make albums for the casual listener.  To truly get the most out of this album, you really need to let yourself go and let the chaos overtake you.  While made up of nine songs, it better serves as a 48-minute music collective, in which the ebb and flow of destruction and despair jostle the listener into a zen-like death metal meditation.  It’s a challenge to try to decipher individual tracks (yes, some could call this a negative but it truly does work for the album) sans a few key moments that almost better serve as place markers.  The bells of “Metastasis”, the chants of “Blight”, and the eerie moment when the ominous growls turn into a high pitched scream that practically echoes a short guitar solo in “Inservitude of Asynchronous Duality” all trigger a response of knowing the approximate location on the disc.

While the lo-fi death metal wars keep pushing things to become more and more cavernous, there are some impressive rewards for those with a tolerance for the primitive and barbaric.  The trance-like state that can be achieved listening to Unholy is not easily induced.  There needs to be just the right level of chaos amongst the riffs and accompanying solos and the proper level of desolation and melancholy when things slow down (“Blight” and “Despair”) to invoke a sympathetic level of response, as opposed to just thinking “what is this noise.”  It’s strange to think of death metal as trance-like, yet despite its outward bludgeoning, that’s exactly what is at stake here.  A just plain otherworldly and oppressive trance. 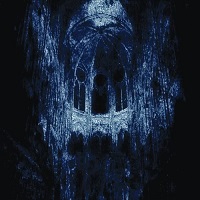