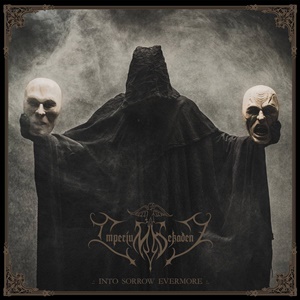 Imperium Dekadenz has always walked their own path, and it’s served the German duo well. Each release has brought on more acclaim and a wider audience, and with that, increasingly towering expectations at the minimum. Having always delivered decisively, who can blame one from holding the band to such standards? With their first release in four years, Into Sorrow Evermore is out to firmly stamp that THE reigning leaders of atmospheric black metal aren’t ceding their crown.

These gentlemen have always been the unofficial soundtrack to the German Black Forest – haunting, dreary, yet serene in atmosphere. That palpable aura hits immediately with the title track, serenading the listener with calmly murky keyboards that quickly transition to a bleak opening guitar melody that exemplifies the sullen mood that the band is putting forth. Horaz’s familiar gritty shriek is as fitting as ever, while the drum work courtesy of Vespasian provides the right amount of kick. Did we mention the mesmerizing guitar work? That dreary yet razor sharp six string momentum bleeds into “Truth Under Stars,” with the tone nasty and the pace steady. The song gradually morphs into a slower affair, with particularly notable clean vocal passages showing a different angle, before finishing up furiously.

“Aurora” begins with a dazzlingly emotive piano piece that drags the listener further into the wooded fog, of which merges with rhythms that result in what is the album’s most moving and downtrodden track. “Elysian Fields” offers a contrasting buzzsaw attack that is more direct and punchy than its predecessor, while “Forests in Gale” is defined by a wealth of melancholic fury with a particularly snarling vocal resonance. “Awakened Beyond Dreams” is the longest song at over eight minutes, containing a wealth of faster old school black metal savagery, while an ethereal clean guitar piece tightly weaves a sorrowful tale that is an Imperium Dekadanz signature. “November Monument” is a mid-paced affair highlighted by thick bass strumming and a stirring solo at the four-minute mark that’s a personal favorite moment of Into Sorrow Evermore. Finally, we have “Memories… a Raging River” as a fitting closer; being equal parts frenetic, vigorous, and harrowing to display the band’s many faces in a colossal burst that is likely to stick with the listener.

The mix is an element that must be praised on Into Sorrow Evermore, with all of the pieces of the band’s notoriously thick sound being equally present, culminating in a meticulous balance. The result is the enigmatic ambiance that’s expected from one of the purveyors of the atmospheric side of black metal.

With Into Sorrow Evermore being Imperium Dekadenz’s seventh studio album, their continued evolution into an increasingly refined monster is profound. Horaz and Vespasian remain true to their vision, yet always manage to provide increasingly captivating and memorable music of which sets the standard for the genre. May their longevity continue.