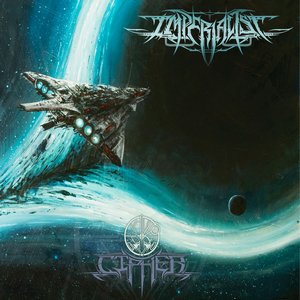 There is a lot of majesty, chaos, and terror to be found in story telling when it is intertwined with the cosmos. Like Vektor with Terminal Redux or Between The Buried And Me’s The Parallax II (and from what I understand, most of Voivod’s discography, though you’ll have to forgive me for being unfamiliar); there is a lot to explore in themes that tread over ground not occupied by satanic rituals, goats, and the general wanton violence that most blackened metal groups occupy. This is the route California natives Imperialist are taking on Cipher and, usually, it works.

Though billed as black metal without modifiers, this really comes across to these ears as more of a blackened death metal release, though that may have to do with the very sterile production (much like the insides of a space-going vessel). Throwaway intro ‘Continuum’ drops into ‘The Singularity’ and the stage is set for everything that will follow: riffs cycle through patterns, the vocals come across largely intelligible, and blast beats are the name of the game. On rare occasion a solo will come to the fore and give variety, as on ‘Binary Coalescence’ but this is the exception and not the rule. On a whole each of the songs on Cipher follow the same structure.

Part of that is reflected in the song lengths as well which are all very similar and all too long. Intro notwithstanding the songs all average around five and a half minutes (with two going beyond seven) and when this is coupled with formulaic nature of the songs the whole affair takes on the samey blackness of space without starlight. Perhaps intentional as this seems to be a concept album, but thematic unity is one thing and the monotony here another.

Striking, at least, is the cover art, provided by Adam Burke (the gentleman that did the stunning cover for Terminal Redux). Unfortunate that beneath that striking cover is a journey to the stars that doesn’t really go anywhere.