There are times when Blistering doesn’t even have to listen to an album in order to review it. Of course, we’d never do such a thing, for journalistic integrity ranks as high on our list as good hygiene and taking naps, so head-first we dove into Impending Doom’s fourth album, Baptized in Filth. Being that the deathcore scene Impending Doom is so happily a part of couldn’t spell “progression” if you spotted them the “progress,” Baptized in Filth was every bit as mundane as we initially thought.

Discounting the fact they’re overtly Christian, Impending Doom’s message of fire and brimstone in their touch-and-go deathcore is neutered right off the bat when the beatdown and chug-intensive “Murderer” hits the floor. As expected, the band whips out as many downward guitar brushstrokes as they can, trying their hardest to set up the beatdown with an array of extreme metal appendages (i.e. blast beats, warped speed-picking, etc.). Even Demon Hunter’s Ryan Clark gets in on the clean vocal act for “My Light Unseen,” which is perhaps the only song here worth a salt, only because it steps out from the band’s hold-steady adherence to their deathcore sound. (Note: the band has brandished themselves as “Gorship,” but we’re not playing that game).

Rather than waste one’s time fussing over a release like Baptized in Filth, it’s probably best to let Impending Doom and their Christian deathcore cohorts have their fun. It’s fleeting; trends like this never hold up, and if they did, then yeah, we’d all be in really big trouble. Such a happening would be even scarier than the fairytales Impending Doom are so apt to barking about. 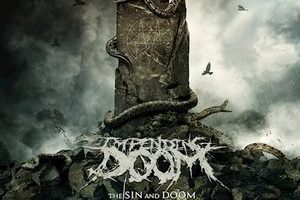