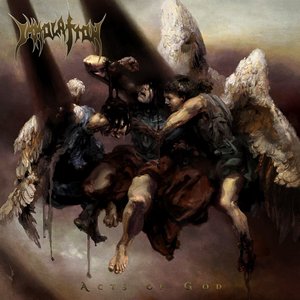 Champions of New York death metal for over 35 years at this point, Immolation have certainly made their mark on the scene.  If there’s one lasting monument, it’s that no one else really sounds like them, despite being able to hear the band’s influences – particularly in the last decade or so – popping up throughout the extreme scene.  So Acts of God, like much of the band’s back catalog, doesn’t veer too far away from the source but it doesn’t need to either.

Everything that has made Immolation a force to be reckoned with sits well with Acts of God.  That monolithic, towering feeling of the band’s whirlwind of riffs and Ross Dolan’s commanding vocals hit you right from the opening of “An Act of God” and don’t let go over the course of the album.  Those odd melodic quirks, such as the pinch harmonics and guitar squealing that gave the band an even further sense of individuality, all find their respected place in the mix, as well as some fiery guitar soloing and some ear-catching melodies (“When Halos Burn” being a personal favorite here with its off-kilter melodies).  What really makes the album stand tall though, is that fact that the menacing, knock you off your feet feeling that has encompassed the band’s best works (such as the classic Here in After) feel just as daunting, and near intimidating as ever.  Particularly with a more mid-tempo cut like “The Age of No Light” or “Immoral Stain.”  Also aiding the band is that these songs are to the point.  Most are around the 3-4 minute mark, seemingly knowing exactly where to go for the gusto and where to stop – never is a moment wasted.

Acts of God is a potent offering from a band that still has something to say after many years in the scene.  Immolation can jar you with oppressive riffing and chaos, but the way that they continue to make it catchy and memorable is why they continue to be a quickly identifiable force within death metal.