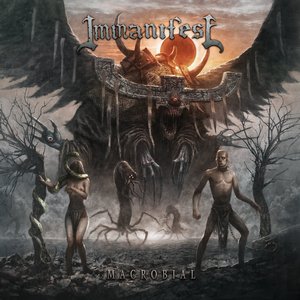 Sometimes you get to a point where you get discouraged by the volume of bands that simply play to the tropes of a genre. To that end, there’s a lot of ‘filler’ symphonic black/death metal that exists in the marketplace, looking to hook listeners keen to hear more of that Septicflesh, Dimmu Borgir, or Graveworm-type approach and cinematic flair. Immanifest may have a ‘new’ name, but they actually first popped out in 2010 with the Qliphotic EP – laying the groundwork for their first full-length on The Artisan Era.

Given the label’s pedigree, it was assumed that Immanifest wouldn’t simply be another cookie-cutter act, and they do quite deliver on that promise. There will be some unmistakable pieces that come along with Immanifest falling into that symphonic black/death category, but as Macrobial progresses you will be impressed with their ability to bring things in a different direction. For every moment of the more usual mid-tempo riffing with synths sprinkled lovingly atop, there’s a twist or turn to enjoy. There’s some moments that felt genuinely emotive, and impressively without feeling disingenuous to the extreme metal feeling that surrounds them. “Emissaries of Ikhenaton” stands out here, with a notably cinematic scope despite the utter pounding from the drums and frantic riffs – the second half of the song becomes noticeably more melodic and emotional in tone. The follow-up, “Black Miracle,” also swings in more eerie atmospheres while engaging in somewhat technical riffing, bathing the band in a bleak darkness. The same spirit engulfs later track “Niflheim,” while the band alternates between a bludgeoning and a melodic coup de grace.

It’s tough to stand out in the symphonic extreme metal grouping, but Immanifest clearly have the goods to do so based upon the strengths of Macrobial. The combination of some light electronics, macabre atmosphere, dreamy melodies, and death metal force make this one an album worth looking into if you enjoy the genre.