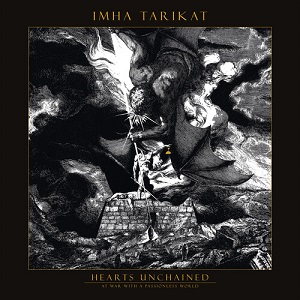 Imha Tarikat’s second foray, 2020’s Sternenberster, was a Gatling gun of vocal exhortations. Founder, multi-instrumentalist and songwriter Ruhsuz Cellât (real name: Kerem Yilmaz) peppered, sprayed, annihilated (whatever you want to call it) his songs with various unhinged shouts and grunts. They weren’t too far off from Tom G. Warrior’s classic, random “Ughs.” That sort of disregard for convention and all-out intensity turned Sternenberster into one of 2020’s most unsung releases. Cellât has since returned with his third full-length, the slightly more-controlled-but-no-less dangerous Hearts Unchained – At War with a Passionless World.

Cellât is now using English song titles and lyrics — a notable change from the band’s all-German approach. His hoarse, burly vocal volleys change drastically from black metal’s standard raspy, sometimes even whispered style. Cellât belts over these songs as a result — just look at “Dominator Proselytism Tactics,” where he’s bombarding the verses with total disregard. It’s the ideal contrast to music that is largely melodic without tipping the melodic scales; i.e. there’s not a trace of flowery keyboards or poignant melodies. Instead, Cellât prefers tremolo-picked melodies that usually reach a climax, then move to the back for d-beat-styled thrash or all-out blasting.

Hearts Unchained may not burst with the same unpredictability as its predecessor, but there’s no denying the extremity baked into largely striking, cavernous jaunts that further extend black metal’s scope. Cellât has something unique and immediately identifiable here. You’d be a fool to sleep on Imha Tarikat.