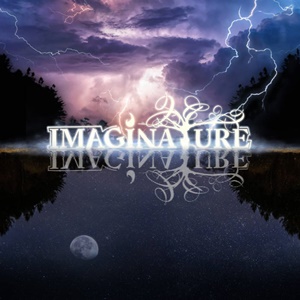 Intertwining ‘imagination’ and ‘nature’ for their moniker, Imaginature from Poland develops an interesting mix of power, progressive, and symphonic metal on this self-titled album. Between the regular members and guest appearances, fourteen musicians combine to create a varied sound for these eight tracks – exploring horizons far and wide that can be heavy, theatrical, semi-operatic, beyond the expected symphonic and metal textures. As a result, you have performances that can be quite dramatic and propulsive, showcasing an act willing to use a variety of tools at their disposal to deliver an aural kaleidoscope to treasure on numerous levels.

The group possesses a keyboardist in Leszek that often takes center stage for the main musical components – although guitarist Marcin has a solid presence through his crunchy power riffs and progressive nuances. The vocal support from a bevy of guests runs the spectrum from clean power singing to occasional darker/extreme angles – as well as operatic melodies – depending on the needs of the song, males and females circulating in the airspace. Anna Dembowska and Konstantin Naumenko get multiple tracks to showcase their skills, combining brilliantly in a Nightwish/Epica-like duality for the second half favorite “Through the Cellar Door” – the additional pipes, whistles, and stirring guitar lines heightening the excitement of the vocal passages. Power/classic riffs permeate closer “Weather the Storm” – while opener “Atonement” has this Royal Hunt/Kamelot-ish atmosphere between the darker keyboard tone choices and the mysterious voices against the smooth, slightly-strained vocal register. Considering most of the material sits in five to six-minute territory, there’s an adequate balance of setting the mood, getting the proper earworms in motion, and executing some killer instrumental breaks to satisfy the progressive/musician side of things (check out the swift guitar/keyboard interplay on “Edge” for one example).

As their first full-length, Imaginature establishes a sound that can hopefully improve as they gain more seasoning. At times, the rigid nature to specific passages, combined with the array of vocalists who have varying degrees of proper ability/conviction, makes the record a bit challenging to comprehend. Those who love a mix of power/progressive metal with symphonic/cinematic leanings will probably dig this most.