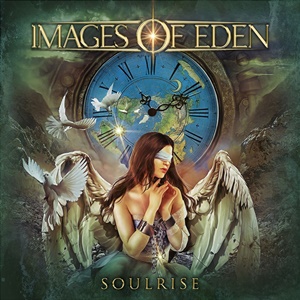 Amidst inevitable priority shifts, Images of Eden continually have developed their style even as the releases come on a five year or more clip. Gordon Tittsworth remains the lone constant from their origins in 1998 – with the latest recruits being bassist Eric Mulvaine, drummer Steve Dorssom and lead guitarist Carlos Urquidi Perez. Soulrise is the quintet’s fourth studio album and first since 2011, marking another shift in terms of style as their progressive metal leanings take a bit of a traditional meets modern hard rock turn over the course of this twelve-track offering.

The modern aspects come into play through the lower-tuning (especially evident in many rhythm guitar passages) and general staccato/aggressive driving parts that veer into territories more well-known to followers of say Sevendust, Disturbed, or Alter Bridge – brief exposure to “Shield Me” or the chugging, mid-tempo driven follow-up “Only Human” tells you Images of Eden haven’t forsaken current approaches when creating their original output. Gordon’s vocal delivery straddles the fierce qualities necessary to be metal while soaring to higher capabilities a la Geoff Tate or Ray Alder – highlighted during a more progressive-oriented arrangement for “Once We Believed” that starts off softer but builds into this dramatic crescendo through off-time drumming escapades and guitar/piano tradeoffs. Where diverse audiences would probably not come together for the two distinct styles that this band mesh together, for the most part Soulrise works because it doesn’t sacrifice one aspect for another – or dilute the ability for catchy hooks and strong musicianship to develop song to song. The second half of the album appears to contain more of the epic tracks – including the almost ten-minute title cut closer, featuring everything from symphonic choirs to shredding/double bass action, an acoustic transition midway through that leads into a narrative element towards the conclusion.

You can expect a record that blends together the progressive metal arena Images of Eden established in the past, but also incorporates a modern groove aspect in terms of the feel that possibly could bring in some new people to the fold. It could be an exciting time to see where Soulrise takes these musicians over the next few years.