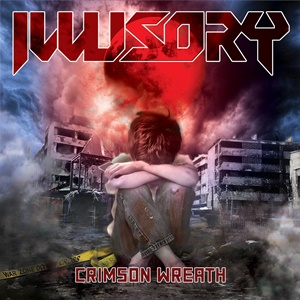 Evolving under a new moniker after a twenty-year period as The Ivory Tower, Illusory began in 2012 and have released two albums previous to this latest outing Crimson Wreath. An expansive outing with fourteen tracks of varying lengths (“The Voice Inside Me” at 88 seconds, the closer “Fortress of Sadness” the longest at just over ten minutes), the sextet delivers a theatrical and dramatic brand of heavy metal, intertwining a wide swath of dynamic influences that can be quite progressive and heady, yet melodic and touching.

Harmonies abound between the dual guitar chemistry of Greg Bakos and George Papantonis as well as bassist Niki Danos – the type that Iron Maiden and Queensrÿche brought to heights of arena-level fervor in the 1980’s to make the title track and the marching nature of “Ashes to Dust” two immediate standouts – the latter featuring forceful gang background vocals in key spots. The lush keyboard and orchestration passages from Makis Vandoros for the ballad “Past Forever Lost” set up some magnificent acoustic/electric guitar lead breaks – a track that will find favor for all who love late 80’s to mid-90’s Savatage. These musicians understand the art of locking into specific catchy main riffs and naturally embellishing and enhancing them through layers of sweet transitions, uplifting chord progressions or vocal melodies that are pleasing to hear, process, and latch onto through deeper, more intense listening sessions. Vocalist Dee Theodorou has a mid-range and slightly nasal-like register that could be similar to what you hear with Mob Rules singer Klaus Dirks – serviceable during an epic nine-minute track like “The Isle of Shadows” but not necessarily as evil/sinister as necessary during a heavier cut such as “Immortal No”. Also at 77 minutes, Crimson Wreath could be a tough sell for those not open-minded enough to stick around for its entirety in a marketplace that prefers tidy, compact albums around the 35 to 45-minute range.

Quality usually reigns over these minor deficiencies – so those willing to spend the energy investing in Illusory will probably feel enlightened and encouraged by this Greek group.