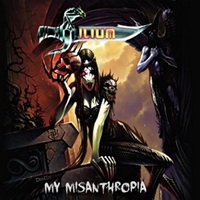 The land down under is not just known for light AOR/melodic rock, Men at Work, and Inxs anymore. There’s quite a productive heavy metal scene – and in a variety of sub-genres to boot. Ilium is a veteran power metal band that have quietly carved out an impressive discography since their 1998 inception, including a couple of potent vocalists in the mix with Lord Tim and Mike DiMeo over the past 10 years. This sixth full-length My Misanthropia may be another transitional one in their history, as they pick up the ace services of Balance of Power/Pyramaze singer Lance King – and four years between records can seem like a lifetime in the ‘here today/gone tomorrow’ release schedule so let’s press play and dig into these 10 tracks.

Overall Ilium presents a wide variety of power arrangements – some of them coming from more of the Rainbow meets Firewind context in terms of spirited, driving riffs and matching sinister melodies like the opening title cut while others have that happier, warrior-oriented chord progressions sure to induce unison chants, as “Godless Theocracies” offers. Guitarists Jason Hodges and Adam Smith (the latter also handling bass and keyboard duties) serve up the best duals, rhythms, and lead breaks one can muster given their decades dedicated to their craft. A spacious vibe that harkens back to Pagan’s Mind meets David Bowie comes forth on one of the record’s highlights, “Orbiting a Sun of Sadness” – while “Penny Black” is a speed burner that gives classic Riot or Gamma Ray a run for the testosterone border, Lance King using all facets of his multi-octave range as the neo-classical harmonies reign over all for the instrumental break.

At this point in their career, Ilium will struggle to gain mass appeal if they don’t take into consideration those extra elements that make an act stand out from the pack. My Misanthropia takes a misstep in the production department – everything feeling very compressed as drummer Tim Yatras is very capable on all facets of steady metal grooves and killer fill parts yet is given a computerized, synthetic tone throughout. You just know budget constraints are probably the culprit, but this can make or break long-term appeal for the mid-level or third tier acts wishing to ascend the ranks for a bigger following.

As the final two songs “Yuletide Ebbs” with its majestic Rainbow-like riff and theatrical “The Cryptozoologist” (what a song title) finish this 45 minute album, this is a classic case of quality performances and songs short-changed by the distant sonic values.