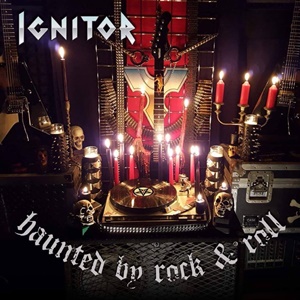 Texas act Ignitor contains some interesting members with long ties to the history of the 80’s metal/hard rock scene. Guitarist Batlord (aka Stuart Laurence) and bassist Billy Dansfiell come from Agony Column, while singer Jason McMaster developed his imprint through Watchtower and Dangerous Toys. Haunted by Rock & Roll is Jason’s fourth album with this band and sixth overall for Ignitor since beginning in 2003 – another ten- track exercise in the long running impact and importance of classic/traditionally driven heavy metal.

Jason chooses to channel many old school screams and soulful measures in these melodies – from a Halford-esque scream propensity to a mid-range that resonates Ronnie James Dio, both evident on highlight “Heavy Is the Hand That Wears the Crown”. Musically the quintet keeps the riffs, hooks, and tempos flowing in that early to mid-80’s heavy metal platform – occasionally speedy when necessary, plus adding chilling clean atmosphere for dynamic contrasts. When paying tribute to the lifestyle and image of the genre for “Leather Forever”, you get sterling, crisp mid-tempo riffs, steady rhythm section supplementation plus the commanding, professional delivery that McMaster summons from decades of experience. Rearing back into the Raven catalog for closer “Hung, Drawn, and Quartered”, Ignitor ignite that speed cut through thunderous double kick work, spirited fills, and the Batlord/ Robert Williams tandem axe aural fireworks to be a fitting tribute to the band’s legacy while giving newcomers something to discover.

Eschewing illustrations or paintings for a cover that reflects many staples of the scene (candles, vinyl, skulls, bullet belts, road cases, and three almighty electric guitars), Haunted by Rock & Roll doesn’t aim to shake up the formula, but rather stand firm in its cause. Primitive, primal, down to earth and anthem-oriented for the studs and leather-clad hordes, Ignitor fuse the best of American, British, and German heavy metal from the first half of the 1980’s and spit out songs that shine.