Wednesday, 8th May 2013 By Kenneth Gallant 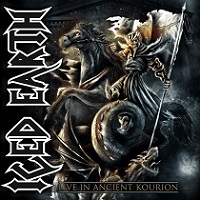 Iced Earth mainmain Jon Schaffer has seen some dark times of late, with the flip-flop of singers, effectively creating a revolving door in that position. Tim Owens walked away from the band after recording Framing Armageddon and then Matt Barlow made his triumphant return to the fold on The Crucible of Man, but quickly exited for the second time. Despite the bleak outlook, Schaffer soldiered on, and what he came back with was perhaps the wisest choice he’s ever made: snagging Stu Block from Into Eternity.

To put it bluntly, Block is a beast as a singer and his delivery and tone on Into Eternity albums translates with some authority. His combination of vocal styles (mainly progressive death) is utilized in a manner that brings plenty of muscle into Iced Earth. His performance mostly focuses on mid-range vocals reminiscent of Barlow and he lets out plenty of Ripper-styled screams. He’s definitely brought a new dimension to Dystopia, and now he gets a chance to flex further muscles on the live set, Live In Ancient Kourion, which was recorded in Cyprus, Greece.

The venue is the ancient theatre Kourion and for nearly two-and-a=half hours, the band tore into 29 songs that covered material from Dystopia, Night of the Stormrider, Dark Saga, The Horror Show and many other classics from their discography. Block steals the show does an admirable job on classics like “I Died for You,” “The Hunter” and “Dante’s Inferno.” There wasn’t a bad rendition to be had here of the classic material, although he stumbled slightly through “Dracula,” but that little error won’t sour your listening experience overall.

On the technical side of things, the production on Live in Ancient Kourion is raw sounding and combined with the enthusiasm of the Cyprus crowd, the recording gives off a special feel…I love moments like when concerts of this magnitude are so emblazoned with the performance. It also helps to have the new guy prove his mettle and what better place for this ceremony to play out in ancient Kourion in such grand fashion. We should all hail the mighty Block and give the singer his due.