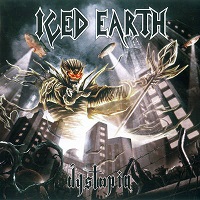 About as overrated of a band as there is in the underground, Iced Earth (more specifically, Jon Schaffer) have produced possibly three new ideas in the past decade. They’ve basically run triplet riffs and chest-beating vocals into the ground since 1996’s minor hit The Dark Saga, essentially basing their career off one album. When combined with Schaffer’s outspoken nature, Iced Earth are a polarizing figure in the same way Manowar is, minus the whole loincloth and swords thing. The two should challenge each other to a dual.

Dystopia, though, finds the band reinvigorated and fresh, the product of newsinger

Stu Block (Into Eternity) and his versatile, convincing pipes. Schaffer has mostly kept the reins on Block, writing material suited for the singer’s mid-range, something that wasn’t always explored to the fullest in Into Eternity. Nevertheless, Block is responsible for the album’s elite moments, including the quick falsetto portions of “Boiling Point” (old singer Matt Barlow is channeled here) and the bombastic chorus of “Dystopia.” He’s definitely more suited for IE than Ripper Owens ever was, that’s for sure.

One can spot an Iced Earth song

from a mile away, and such familiarity gives headway as to where certain songs are going to head, like the mid-paced romp of “Anthem” and the galloping “Equilibrium” and “Days of Rage” both of which boast pretty much the same triplet-gallop IE has used for the past 15 years. Still, hard to knock the ballad “End of Innocence” (Block gets very tender) and European-flavored “Tragedy and Triumph.”

The American metal scene is ripe for Iced Earth’s taking with Dystopia. With Nevermore currently sidelined, Jag Panzer disbanded, and few, if any worthy newcomers, Schaffer’s well-known (and commendable) determination might finally reap the rewards he’s always deserved. It’s easy to knock the man’s songwriting and creative acumen; very difficult to rag on a guy who has gotten up from the mat more than anyone ever should. Dystopia is a winner.