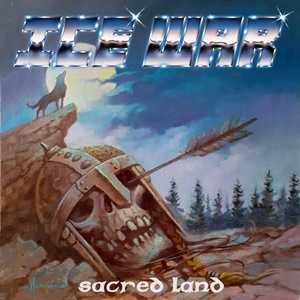 Prolific in output with Sacred Land being the fourth original full-length since 2017 (throwing in a Canadian Classics cover record in 2019), Ice War is a one-man project for Jo Capitalicide – also known for his work in the speed metal trio Aphrodite. Whereas the previous outing Defender, Destroyer kept most of the material in the traditional/speed-oriented vein, this record explores a bit more Jo’s classic doom influences for plenty of fist waving, headbanging moments – although the results could be mixed due to specific inherent limitations on the vocal front.

The ability to create the ideal musical passage/hook and extend things out logically for maximum metal output is obvious when taking in the Candlemass and Black Sabbath-like low-tuned guitar action and plodding tempo backing for “Crystal Mirror” and the opening title track. When he chooses to hit that familiar “Black Sabbath”-Iommi triad note that conjures up the devil at the start of “So Far Away”, smartly the tempo picks up to make the arrangement a bit more of a conventional heavy metal offering. The chops are there, the pacing perfect to convey the affinity for Candlemass circa Messiah M. during their late 80’s heydays as well as the Black Sabbath with Ozzy back catalog, but the major deterrent for solid listening remains the off kilter vocal register Jo possesses. He tries his best to hit those operatic-like moments of the greats, but he cannot convincingly hold those parts and sounds quite strained from the first verse on the title track to the concluding moments for “Slay the Beast”. And that’s not ideal on a seven-song album that clocks in at thirty-four minutes where a hired gun could elevate these tracks to a stronger, more sustainable level for long-term retention.

It’s not enough these days to wave the ‘traditional’ flag and have everyone flock to your work – the quality on all fronts has to be there, or otherwise the faithful will move on quickly. Hopefully the next Ice War outing can rectify these drawbacks, as the intent and ability should increase with seasoning and coaching in the right places. 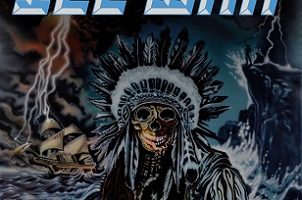