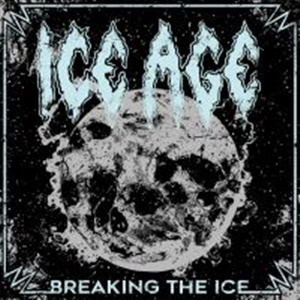 During the 1980’s, tape traders began scouring the globe to unearth underground gold beyond label product – hoping to be on the ground floor of something monumental. That’s how this scribe came to know Swedish group Ice Age. Beyond the fact that they released four demos from 1986-1989, the fact that they were an all-female thrash band piqued interest. Management trouble and lineup problems put Ice Age to rest in the early 90’s (Debbie Gunn of Sentinel Beast in one of those incarnations) – finally reuniting in 2014, and playing the Gothenburg Sound Festival the following year to resounding success. Hard to believe that their debut album Breaking the Ice finally hits the streets, and the ten tracks tie up the past and present with this current lineup (Linnea Landstedt on lead guitar and Manimal drummer André Holmqvist joining original members Sabrina Kihlstrand on vocals/guitar and bassist Viktoria Larsson).

Choosing to revitalize five classics, the band wisely spread these tracks out against the newer material – which all stack up very well in a melodic thrash template, where speed isn’t necessarily the emphasis over solid riffs, harmonic hooks, and powerful grooves with double bass emphasis that keep the proceedings bouncy and catchy. Occasional progressive/off-time bursts allow “General Alert” to be an older highlight, the guitar accents and gear shifts tempo-wise aid Sabrina’s addictive chorus work and venomous accents to make me think of Leather Leone from Chastain. Choosing to personalize material based on people who have hurt members behaviorally for “Clever” or on the management side for “Hell or Nothing”, the songwriting and performances haven’t lost one iota of aggression, the latter possessing a bit of that power vibe that sits comfortably in a Primal Fear/Mystic Prophecy vein. Massive straightforward headbanging will occur during the verses of “Total Collapse”, another number that straddles the best of latter 80’s Bay Area thrash with possibly the early 90’s period of Morgana Lefay.

Because the songs rarely go over five minutes (in fact the opener “Fleet Street” is the epic at 6:40), Ice Age remain efficient at executing their ideas without prolonging the proceedings. Gaining a second opportunity to appease the thrash audiences, Breaking the Ice couldn’t have come at a better time – and hopefully this comeback will be just as fruitful on subsequent studio sessions.