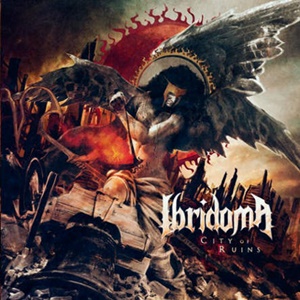 Keeping up with their every two-year album clip, Italian heavy metal act Ibridoma return for their fifth full-length in City of Ruins, along with a new record deal with Punishment 18 Records. The core of the quintet has been together since their inception in 2001, and the latest second guitarist Sebastiano Ciccalè came into the fold five years ago – so it’s clear they have a solid foundation and understanding of where they want to go. After a few passes at the ten tracks, it’s clearly evident that these musicians prefer a stripped down, anthem-based template to their style – the focus on easy to ingest musical hooks and smooth melodies/choruses to bring those catchy passages home.

The influences vary depending on the atmosphere and attack the song needs. Opener “Sadness Comes” for instance has a mid-tempo Megadeth stomp circa Countdown to Extinction, especially through its varied rhythm guitar layers and subsequent transitions, while the title cut has a bit of an alternative transition during the chorus that serves as a counterpoint to a mostly melodic metal template. A standout element to the group is the personal inflections and attitude of vocalist Christian Bartolacci – the man has a flair for holding out some high notes, but mostly stays within a mid-range that bares resemblance to Lizzy Borden. Check out the power anthem “Evil Wind” as well as the headbanging “My Nightmare” for two clear samples of his magnetic nature and proper punctuation to elevate these arrangements to that next level of memory. Because of the varied pool the band pull from – a little traditional metal, power metal, and alternative/pop metal for good measure – it ensures versatility, but at times the specific riffs and melodies feel a tad too familiar for comfort (“Fragile” most evident in some of The Offspring hints).

Ending on a tranquil, acoustic-laden note for “I’m Broken” – Ibridoma seat themselves well at the table for those who like simple yet effective melodic metal that incorporates a host of 80’s and 90’s tastes.