I Killed Everyone – Necrospire (Pavement Entertainment) 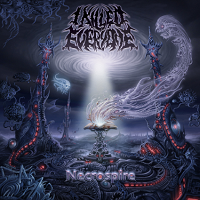 Quite hard to dig this band and their name, maybe because it makes DR think of the short-lived metalcore supergroup I Killed the Prom Queen, who came and went in a New York minute (they were from Australia). Moral of the story: Don’t have “killed” in your moniker, and don’t attach yourself to the trend of the day. The jury is out if Chicago’s I Killed Everyone will last more than a few wasted years (they were formed in 2008, so they look functional), but their Necrospire debut full-length has “short shelf life” written all over it.

Appropriately enough, the band cite some legitimate bands as the base for their sound. The trifecta of Cannibal Corpse, Morbid Angel, and Suffocation are strong enough a foundation for any fledgling death metal band, but I Killed Everyone looks like they’ve trolled a bit too many deathcore Facebook pages for their jams. Shame, ‘cause they create some forward-motion via technical riffing and exciting solos, but predictably, here come the beatdowns, gurgled vocals…and the band stalls out. It happens on opener “A Sanguinary Mass,” as well as “The Devourer Beyond” and “State of Filth,” thus nullifying any sort of positive connotations to the bands they supposedly want to emulate.

A band like I Killed Everyone need to stop paying attention to what’s popular and follow what’s really in the pit of their collective bellies. Eventually, they’ll learn that being uncool is really cool.