I Am War – Outlive You All (Razor & Tie Records) 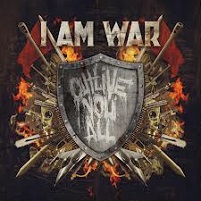 The four-headed Orange County, CA monster that was Atreyu, Bleeding Through, Eighteen Visions, and Throwdown has lost considerable, considerablemuster over the years. One can remember in the pre-YouTube days whenHeadbanger’s Ball had these four on endless rotation, which in a roundabout way, presented the OC on par with Bay Area thrash or New York hardcore. Most knew better, and sure enough, Atreyu went on hiatus, Eighteen Visions split up, and Bleeding Through and Throwdown have been left to toil in mid-level obscurity. However, the chummy relationships of the bands has survived, with Atreyu frontman Alex Varkatzas and Bleeding Through main dude Brendan Schieppati hooking up in the singularly-focused I Am War.

Clocking in at a tight 30 minutes and change, the band’s Outlive You All debut is a thrash-punk amalgam that is more Bleeding Through than Atreyu, which was probably the right way to go. Varkatzas does most of the vocal grunt work, doling out his patented junior pig squeal that is nowhere near as repulsive as it used to be. Maybe it’s because the man is singing over fast and grizzled hardcore metal, not rehashed metalcore. Regardless, the muscle and jarring impact of the 11 cuts on Outlive You All may not have clear separation from each other, but they’re far from puny.

Perhaps the real kicker here are the song titles, which leave little to the imagination (see: “Uninvite Me to Your Facebook Page Part I,” and “Hold This Sword with Your Face”). Trying to decipher Varkatzas’s barks are difficult, and even Schieppati gets in on the action every now and then, but hey, there are no clean vocals. Score. The duo will more than likely preach to the press as to how this is a “return to our roots”-styled album, and it is. No real thinking involved, no attempts at getting cute with keyboards or saccharine choruses, either. Alas, it’s more formidable than an Orange County-spawned four-headed monster.