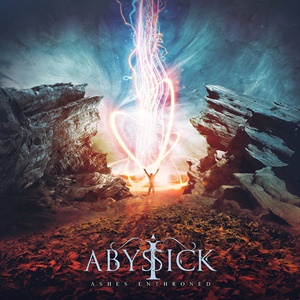 Calling Greece home, I Abyssick are a newer quartet of musicians that formed in 2017, recording their debut album Ashes Enthroned over the past several years and finally making a deal with Sleaszy Rider to release the fruits of their labor. Choosing to develop a sound that straddles multiple sub-genres of varying melody/extreme tendencies could be an asset – or a deficit – depending on the authenticity and natural blending of influences. In the favor of these musicians is an open-minded embrace to doom, classic power, gothic, and extreme metal aspects to allow song to song a heightened sense of wonder, creating longer/epic arrangements fueled by passion, intrigue, and atmosphere.

Using a mixture of clean/extreme vocals along with the music that’s equally diverse ensures that dynamic entity listeners desire from track to track, although it’s very evident that classic doom sets the foundation to the preferences of the band. Drummer Aggelos Seaito can set a resting heart beat main tempo and then circle around transitions in power, thrash, or even death/semi-blasting angles during highlights such as “In a Land of Ash and Debris” and “Truth”. The lower-tuned guitars convey a darker, crunchier heaviness in that Nevermore/Morgana Lefay category as Constantin Maris and George Petropoulos fill the aural canvas with musical portraits of pointed sharpness and then clean/heavy contrasts – their work within “Mankind?” floating from sinister power riffs to pounding, staccato-ish parts that hammer the head like an anvil. Various narrative and whispering accents add to the tension and anticipation for certain cuts – while the main vocals of Constantin possess a morose, contemplative aspect that matches the music on display, as you imagine a lower register Warrel Dane or Fernando of Moonspell fronting the band. During the second half of the record tracks like “Swept Away” and “Into the Great Unknown” add everything from 90’s doom/death to current extreme tremolo picking passages that diversify the proceedings – as one would not be able to say I Abyssick stay stagnant in one specific pacing or musical hook song to song.

A solid debut that hints at a sustained career if these musicians continue to sharpen their attack, Ashes Enthroned will probably be one of those records talked about on the internet for its mechanics and ability to synthesize numerous sub-genres of metal into something most people of any genre can appreciate.