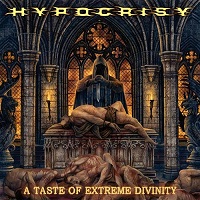 Far and away the best Hypocrisy since their glorious self-titled album from 1999, A Taste of Extreme Divinity is the summation of everything Hypocrisy does well and really, there’s a lot Tagtgren and co. do well. The surprising stint of inactivity (blame it on Tagtgren’s Pain project) has done the band well, apparently, as A Taste of… all but obliterates the inconsistent The Arrival and mostly good Virus.

in the bunch. The band (rounded out by longtime bassist Michael Hedlund and Immortal drummer Horgh) still are firmly rooted in traditional death metal, as evidenced by opener “Valley of the Damned” and “Weed Out the Weak.”

like “Solar Empire,” “No Tomorrow” and “Alive,” the latter of which includes a quasi, but awfully crushing beatdown of the hardcore variety. Best part is, these songs are all easy to latch onto, a holdover of Hypocrisy’s sound going all the way back to 1994 and the Fourth Dimension album.

Like Immortal, an extended absence has worked in Hypocrisy’s favor. Had A Taste of Extreme Divinity quickly followed up Virus, the impact might not be as profound. Thankfully, we or the band don’t have to concern ourselves with such things. Bravo, Peter.