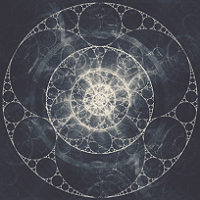 A largely unknown quantity save for their sole 2008 album, The 8th Plague, Spanish technical grinders Hybrid (thank goodness they’re not called “Hybrid Theory”) have undergone a change in the ranks (read: new guitarists), as well as a slight stylistic shift for their sophomore album, Angst. Predicated as one of those albums where the kitchen sink, refrigerator, and garden hose are intended to be thrown into the mix interchangeably, Angst virtually defies categorization while setting a course for schizo-land.

Free of the constraints that normally accompany grind bands (read: songs under two minutes), Hybrid prefers to stay off-balance throughout, sometimes veering from some form of mathcore, to d-beat Swedish crust, to jazzy interludes. There’s not much of a novelty to this, although the brutal “Flesh Fusion Threshold” gives appropriate props to the likes of Dying Fetus and Suffocation. For the relatively straightforward moments on a tune such as “Enter the Void,” (check out the clean vocals) there’s additional quirks and pops to contend with, namely “Doomed to Failure,” which conjures the djent movement all in one fell swoop, then takes off via the use of a sitar and spoken-word bits.

Angst is hard to handle, probably a bit too off-center for the denizens who try to corral Meshuggah or even Candiria, a band Hybrid seems to have looked to for influence. Never the matter, for Angst as a commodity is every bit as perplexing as it seems. Just the way the band intended.